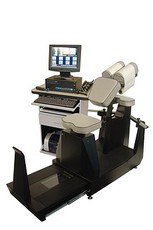 The ProAdjuster
Imagine thirty to forty years ago, if we told you that dentistry would be painless, that doctors would watch television to perform surgeries, that brain surgery for tumors could be done with a laser, that fetuses could be operated on within the uterus, that knife-less surgery could be performed- you would not have believed us. By the same token, would you believe us if we told you that Chiropractic treatments and reorientation of the nervous system could be done comfortably, while you were sitting in an upright position without any turning or sudden movements? Would you believe that newborns as well as the elderly with osteoporosis can be treated safely and gently?

Advances in computers and engineering technologies have been able to uniquely blend with Chiropractic in order to both analyze and treat the human body in such a way that was never before realized. The potential for the human being to end pain and to achieve their peak nervous system function has never been greater. Humans are consistently asking their bodies to perform at higher levels. Now we have the techniques and the technology to match the demand placed on the spine and the nervous system. We now have the capability to fine tune our own energy and enhance every aspect of our lives.

The Perfect Office Visit
Since, you want only the best for your health, consider a chiropractic adjustment with the ProAdjuster. When you match technology and chiropractic, the results are incredible!

The ProAdjuster determines the best adjustment mode for your specific condition, and then administers a controlled percussive force to the misalignment. The treatment is consistent, measurable and extremely gentle. There is no guesswork, and it is safe for individuals of all ages.

It is never too late to improve your health and well-being. Join our many patients who are enjoying a new world of health improvements resulting from treatment with the ProAdjuster. Now is the time to embrace an alternative to your pain. Call today -281-494-5144.

How Does It Work?

Combine Tradition with Technology
To better understand, let's examine the idea of palpation. When a Chiropractor palpates your spine, they are checking for joint fluidity, motion and or rigidity. Improper motion effecting the nerve function is called a subluxation. In a similar fashion to palpation, the ProAdjuster can determine whether the vertebra's motion is too rigid or too fluid. The spine should not be too rigid (hypo-mobile). However, instead of utilizing the practitioner's judgment as to what areas are hyper-mobile or hypo-mobile, the ProAdjuster measures precise levels of motion. Therefore, the ProAdjuster can isolate a problem area faster and more accurately than manual procedures.

First
Our practitioner will engage in a one-on-one conversation with you to determine your medical history, and the causes of your problem. The adjustment and treatment procedures are then customized to fit the patient’s needs.

The next step
In evaluation and treatment is to utilize the ProAdjuster’s sophisticated computer analysis to pinpoint the problem areas. The information is then charted graphically on a computer monitor, so your practitioner can detect the problem areas on each and every visit.

Your practitioner
Will now begin treatment with the ProAdjuster. By applying the ProAdjuster’s Resonant Force Impulses precisely to the affected areas, you will receive gentle, effective treatment to that specific area, reducing the subluxation. This will relieve the pressure on the nerve, allow the nerve to heal, and restore the nerve’s ability to transmit signals to the brain more freely. Most importantly, it will help relieve the pain! In addition, your practitioner may again take the readings after the adjustment with the ProAdjuster to compare the results. Now that’s putting analysis on a whole new level! 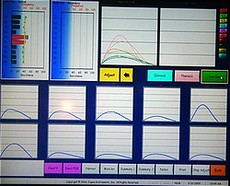 What Are Waveforms?
The waveform that is produced when this
technology is employed is similar to a fingerprint
of the material being tested. See example below.

How does the ProAdjuster's Analysis work?
The instrument introduces a small mechanical force into the body and measures the response through a system of sensors and software.

Getting a ProAdjuster Adjustment
The ProAdjuster is the most advanced Chiropractic analysis and treatment instrument in existence today. With the ProAdjuster, our office has built a sterling reputation by delivering results that make a difference. This technological marvel can help you return to a healthier lifestyle. You may no longer have to live with a persistent painful condition.

Let us HELP YOU!